Unless you’ve been living under a rock, you know there’s plenty of top-notch game consoles that can elevate your gaming experience. With the release of the PlayStation 5 and the Xbox Series X, last year and the Nintendo Switch released within the last 5, there’s plenty to choose from. We’re breaking down all of the best gaming consoles for you so you can ditch the confusion of shopping for the right one. Instead, you can finally enjoy a new way to escape reality!

What are the best game consoles on the market right now?

For each one of the popular game consoles, we’ll break it down by specifications, the top-rated games, and why you should or shouldn’t buy it!

The long-awaited PlayStation 5 dropped last year and it is a beast! After 7 years since the previous generation, the PS5 came with plenty of upgraded technology. And it is by far one of the best gaming consoles your money can buy, especially if you’re looking for something to keep up with your more advanced gaming skills.

PlayStation 5 is top tier for games. If you’re looking to play any type of game, whether you’re looking for a game for kids or the latest first-person shooter, PS5 will have it for you. At its release, games like Call of Duty Black Ops: Cold War and Marvel’s Spiderman: Miles Morales were some of the front runners for it. And even more critically acclaimed games are hitting the shelves for the PS5 soon. Games like God of War: Ragnarok and Hogwarts Legacy will be dropping in 2022.

Why you should buy the PlayStation 5

This game console is one of the most up-to-date systems in terms of available technology and advanced graphics. So if you’re looking to upgrade your gaming experience, the PlayStation 5 console is a fantastic option. You’ll feel like you’re travelling through an alternate universe no matter what game you’re playing with 4K gameplay.

And with revolutionary controller haptics, you’ll feel the rumble of machine-gun fire or the resistance as you draw an arrow with your bow depending on what you decide to play. What does that do for you? It gives you an even more immersive experience in an entirely new world … and you don’t even have to leave your sofa!

This is arguably the best console if you’re an avid gamer. With a PS5, you’ll be ready to take your gaming to the next level, including streaming your gameplay. And if you’re planning on doing that, then go ahead and check out Cyberlink to elevate your streaming experience, too!

The PlayStation 5 is one of the more expensive consoles out there. So unless you’re an experienced player and you’re ready to shell out the money for it, this might be a beast you want to avoid.

There are plenty of games out there for beginner players or even kids for the PS5. But, you might find a better-suited game console in one of the others on this list!

And even if you are ready for the ultimate gaming experience, the PlayStation 5 is a monster of a machine. Finding the right place for it might be a challenge for you because of its big size. If placement and size is a worry for you, this is one you might want to avoid.

Xbox’s most powerful console, Xbox Series X is comparable to Sony’s PlayStation 5. This next-generation Xbox comes with incredibly fast loading time and quiet hardware. Not to mention, it is backwards compatible. So if you’re wanting to take all of your Xbox games from previous generations with you, then it’s all fair game (pun intended)!

Like the PlayStation 5, the Xbox line has plenty of stellar games to keep you entertained for hours (if not days) on your sofa. While you can get quite a few of the same games as the PS5 for an Xbox, two of the top games on the market are the Xbox exclusive Halo Infinite and The Medium.

Not to mention, the top tier gaming company Bethesda was purchased by Microsoft. And we’re hearing all future Bethesda games like The Elder Scrolls and Fall Out lines will possibly be Xbox exclusive titles. While it’s not set in stone, it is something to consider if Bethesda games are some of your favourites!

Why you should buy the Xbox Series X

If you know you’re going for an Xbox of some kind, this might be the one for you. It’s the most powerful Xbox console on the market right now. So if you’re a serious gamer with an affinity for Microsoft’s game consoles, this is an excellent choice. The Xbox Series X also boasts 4k gameplay and 60 fps, so you’re getting the best visual technology for your gaming experience.

Plus with faster loading times and quiet hardware, you’re going to get more out of your games without having to deal with the frustration of lag times and noisy fans.

Why you might want to avoid the Xbox Series X

If you’re not set on buying the Xbox exclusive titles, then you might find a better powerhouse in the PlayStation 5. And if you’re not as serious about your gaming experience in general, your money might be put to better use with one of the smaller game consoles in the market. 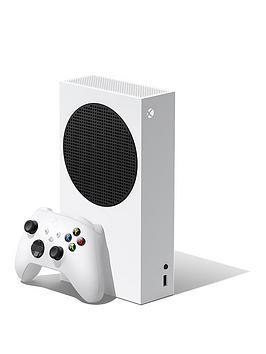 The smallest Xbox ever made, not to mention the cheapest on the market, the Xbox Series S is a great choice if you’re looking for a budget-friendly option.

Why you should buy the Xbox Series S

If you’re concerned about finding a spot for a console in your living room, or if you’re just wanting a casual gaming station, this is an excellent choice. Clocking in as the smallest Xbox currently available, you’re sure to find the right spot for it.

And if you’re a casual gamer or if you’re looking for the right game console for kids, this still ranks as one of the best for you. It boasts excellent specs and faster loading times just like its big brother, the Xbox Series X. But you’ll get it for a fraction of the cost!

Why you might want to avoid the Xbox Series S

If you’re a more serious gamer, this might not be the best option for you. The Xbox Series S is significantly smaller, and not just in physical space. The storage space, coming in at only 512GB SSD, fills up incredibly quickly, especially if you’re an avid gamer who wants to play all the latest and greatest titles.

The Nintendo Switch is, hands-down, the best hybrid game console on the market. It’s a fantastic little machine that’s guaranteed to give you an awesome gaming experience.

Nintendo Switch has all of the Nintendo exclusive titles like the Mario franchise, including Super Smash Brothers, Super Mario World, and Super Mario Odyssey. Not to mention, it’s the only gaming console to release the Pokemon series, too.

But the biggest game to play on Nintendo Switch is The Legend of Zelda: Breath of the Wild. Some critics are even saying it’s worth buying a new Switch just to play this masterpiece of a game.

Why you should buy the Nintendo Switch

The Nintendo Switch is worth it if you’re looking for a hybrid console. You can plug into the television and play with multiple other people. You can also turn it into a handheld console so you can play in the car or in your bed.

And without super big games that take experience like Halo or Call of Duty, the Nintendo Switch is an excellent handheld game console for kids. Plus, if you need something a little more versatile than playing on the television or playing solo, you can flip the stand on the back of the Switch body. It’ll turn into a tabletop game console for you. Talk about a unique hybrid system!

Why you might want to avoid the Nintendo Switch

If you’re a more experienced gamer and want to indulge in massive gameplays like Assassins Creed or Demon Souls, then this isn’t going to be the console for you. The Nintendo Switch focuses more on games for beginner players and kids.

While the Nintendo Switch is the ultimate hybrid and most unique game console on the market, its sister console, the Switch Lite, is perfect if you know you only want to play games by yourself.

You can still get the same great titles as the Nintendo Switch, minus a few. Some game titles aren’t compatible with the Switch Lite since the game requires the removable joycons. Otherwise, quintessential games like The Legend of Zelda: Breath of the Wild and the Pokemon franchise games work pretty well with the Switch Lite.

Why you should buy the Nintendo Switch Lite

If you or your kiddo is dead set on a handheld game console to play it just about anywhere, this is the best choice for you. No need to worry about a docking system or connecting it to the television. You can whip this bad boy out anywhere and play on the go.

Why you might want to avoid the Nintendo Switch Lite

If you’re looking for a gaming console that does more for you and that offers more titles, then this might not be the best choice.

At a glance, these are the best gaming consoles on the market right now. But with differences among all of them, you’ll need to decide what you really need in a game system! Here are the key comparisons in a nutshell:

Ready to get the best game console for you? We can help! Click here to start shopping!